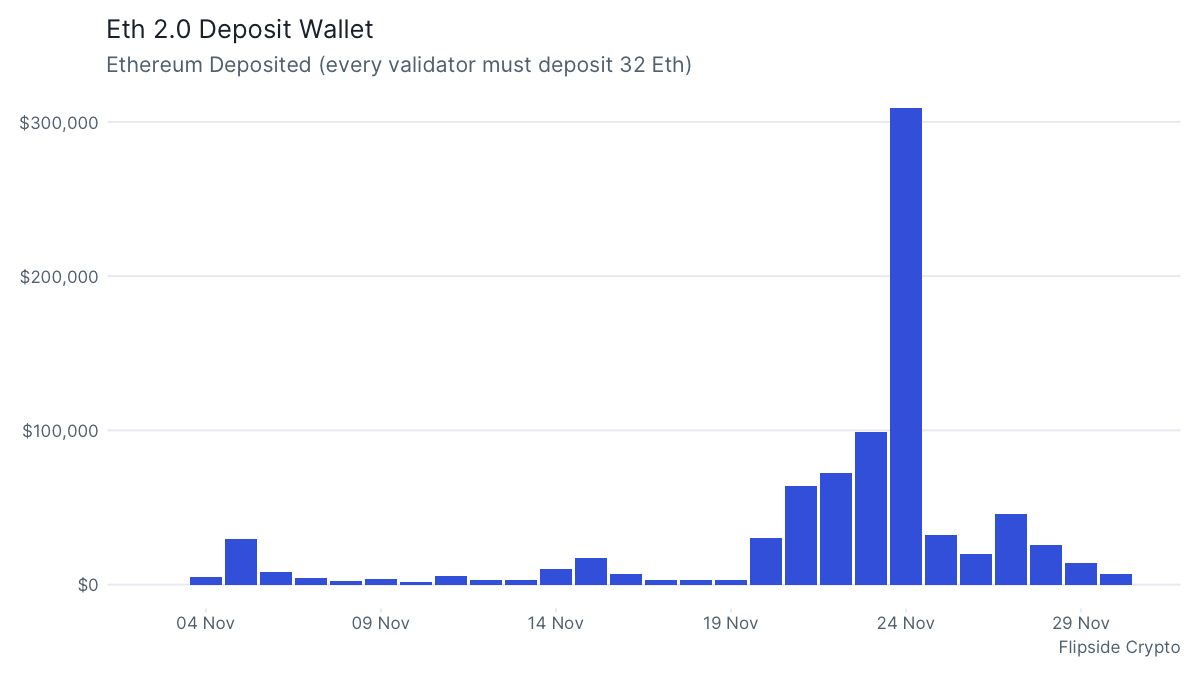 Ethereum is moving from a proof-of-work blockchain, where computing power determines rewards, to a proof-of-stake platform (dubbed Ethereum 2.0), where anyone who locks up their ETH can be chosen to validate blocks.

This is not only more energy efficient and scalable, but it should also allow the network to be more decentralized, and as such, more secure.

The move will happen in stages, with a proof-of-stake mainnet living alongside the current Ethereum network for a while. The first step to launching this mainnet was to accumulate enough ETH (524,288 Ether, or $316 million) in this deposit contract which was launched on November 4.

Stakeholders who deposit exactly 32 ETH (worth around $19,000 at the time of writing) to the contract will become validators on Ethereum 2.0 and earn rewards on the network by processing transactions and creating new blocks.

They will be able to withdraw their tokens only at the onset of phase 1.5, which is expected to launch somewhere between the end of 2021 and beginning of 2022.

The Uncertainty Around the Timeline Seemed to Scare People Off

At first, there was a lot of talk in the community that the contract would not reach its target sum by Dec. 1, thereby delaying the first phase of Ethereum 2.0. This would mean having your 32 ETH locked up for an indefinite period of time — which not many people want to risk.

The graph above clearly reflects that uncertainty at the beginning of November. But as the total locked up started to ramp up, so did the momentum and number of stakeholders willing to join.

10,000 New Validators Joined the Network After the Launch of Ethereum 2.0 was Confirmed for Dec. 1

The considerable influx of new validators coming in on Nov. 24 happened right after the deposit contract reached its minimum amount for launching mainnet.

The fact that Ethereum also saw its price rise nearly 10% over a 24-hour period on Nov. 23, surpassing $600 for the first time in two years, must have inspired confidence in the project and a desire to be in on it.

Indeed, users who are able to lock up the $20K are expected to make a nice return on their investment, with roughly 20% in annualized rewards.

Check out all your data points at Ethereum’s page on CoinMarketCap’s here.

This article is intended to be used and must be used for informational purposes only. It is important to do your own research and analysis before making any material decisions related to any of the products or services described. This article is not intended as, and shall not be construed as, financial advice.

The views and opinions expressed in this article are the author’s own and do not necessarily reflect those of CoinMarketCap.