How people abroad are betting on Trump refusing to leave the White House.

Green means the price went up. Red, the price went down. And when the price goes up, that means more people are betting that Trump will still be in the White House come February 2021.

These bets are being placed on FTX, which is a centralized derivatives exchange. Users could buy tokens like $TRUMPWIN during the election, or $TRUMPFEB since the results, and make money if they win the bet.

Betting on FTX is illegal in the U.S. While some Americans might be using a different IP address to get in, it’s safe to say that most of these users are abroad.

The reason centralized betting markets like FTX are still more appealing to users than decentralized ones like Augur is because the price of transactions on Ethereum (where Augur was built) remains too high for it to be worthwhile. At the time of writing, one transaction on Augur cost $24, versus around $5 on FTX.

Stablecoins and Chainlink Are Benefiting Most From This New Use Case. 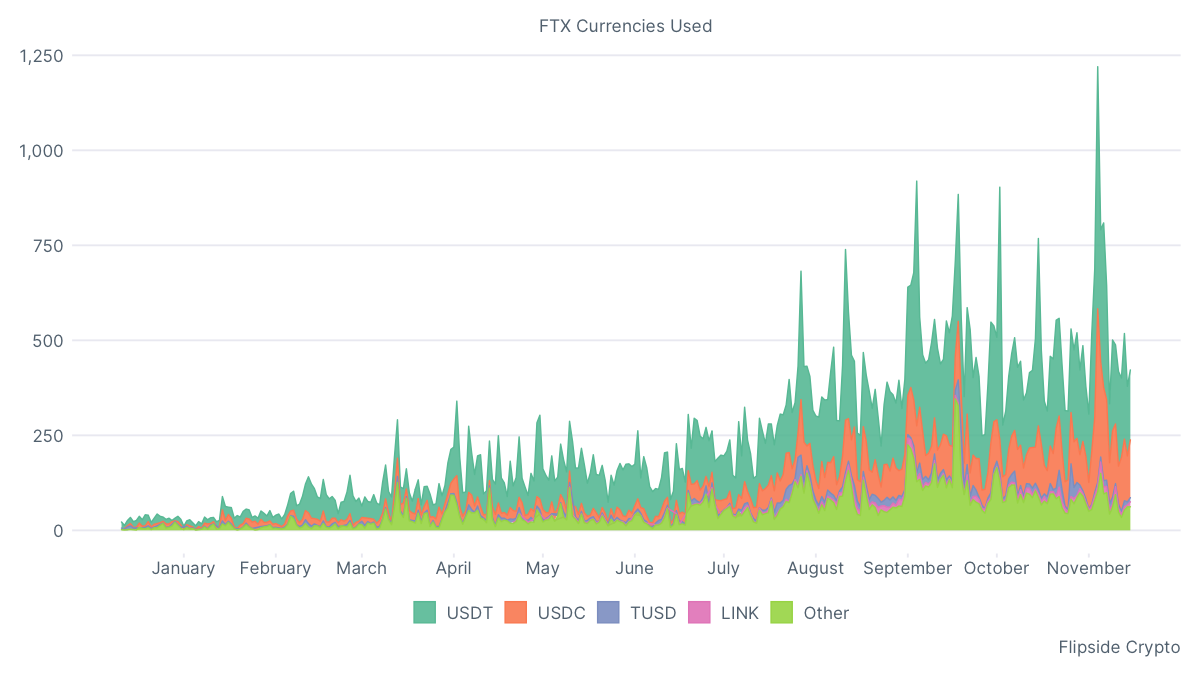 Users placing bets are focused on making money if they win — not if the asset appreciates. The assets that are the most appealing in this case need to be stable in price.

The fact that $LINK is the only non-stablecoin at the top is a testament to its explosive growth in the space. LINK is an Ethereum-based (ERC-20) token that powers Chainlink’s decentralized oracle network. Its price has increased a staggering 500% over the last year as it continues to benefit from the success of decentralized finance (DeFi).

Most of these users thought Trump would win on election night, even as the price of the $TRUMPWIN token went down. 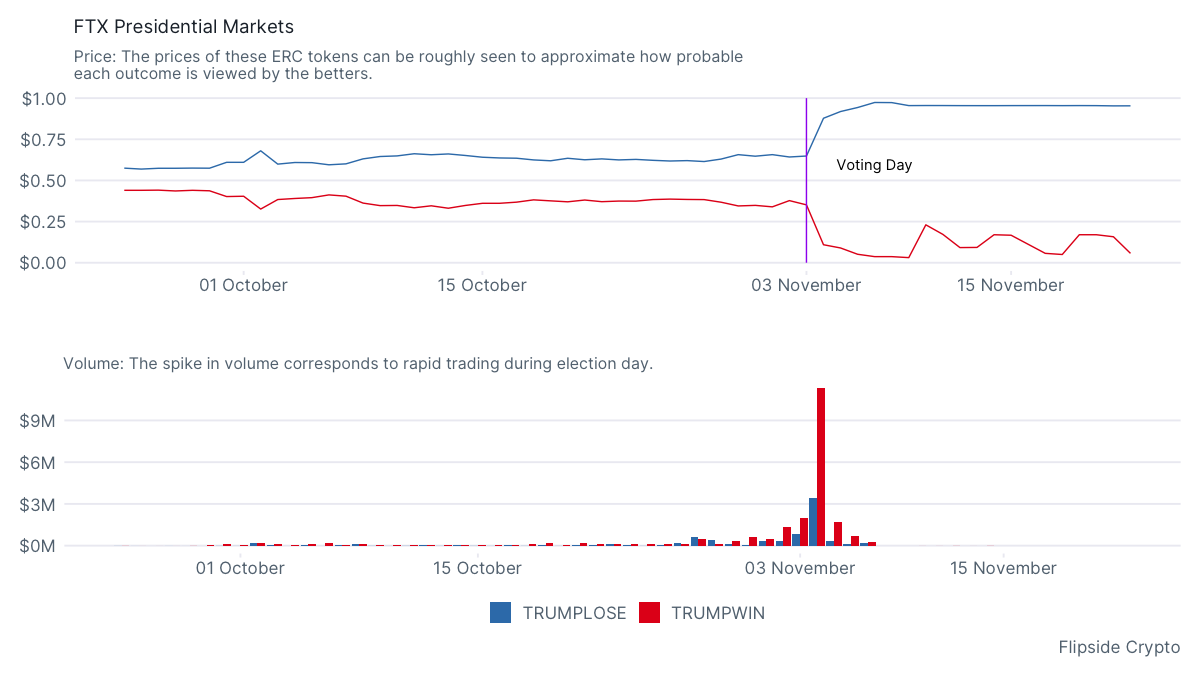 FTX’s betting market for the 2020 U.S. election actually used ERC-20 tokens, in this case $TRUMPWIN and $TRUMPLOSE. The fact that the two tokens were transacted on the Ethereum blockchain — which is completely open-sourced — allows us to see how many users bought and sold them, and for how much.

Users appear to be more active on the TRUMPWIN contract than the TRUMPLOSE, a phenomenon observed across other prediction markets where participants prefer to place bets on the positive framing of the question.

On election day, over $9MM worth of $TRUMPWIN were transacted on Ethereum, while the price of the token went down. This is because prediction markets are designed to move faster than news commentators, and the price of assets is set to remain rational.

But the wisdom of the crowd thought that a Trump win was more likely. Indeed while national polls had Biden up by 8%, the reality was closer to 3%. This is why volume shot up: a lot of new users were happy to buy $TRUMPWIN for 40 cents when they knew it really should have been priced closer to 50 cents.

With a loud majority of MAGA fans on FTX, the exchange ended up allowing users to hold their pro-Trump positions until February 1, 2021.

“Joe Biden has won the 2020 US Presidential election according to the settlement criteria defined for our President 2020 contracts. All presidential contracts (except for TRUMPFEB) have been settled accordingly.

However, some users long TRUMP, long TRUMPWIN, or short BIDEN have complained about the settlement criteria being followed as defined, and instead want us to modify the rules to favor their preferred candidate. As such, we have decided, just this once, to allow these users to effectively hold their positions until February 1st, 2021. If, by then, Trump has been unambiguously reelected to the presidency, they will pay out $1.”

This article is intended to be used and must be used for informational purposes only. It is important to do your own research and analysis before making any material decisions related to any of the products or services described. This article is not intended as, and shall not be construed as, financial advice.

The views and opinions expressed in this article are the author’s own and do not necessarily reflect those of CoinMarketCap.